On 16 December 2022, the Danish Energy Agency has issued permits to the Danish TSO, Energinet, regarding initiation of preliminary site investigations in the Kattegat II and Kriegers Flak II areas as well as the new location chosen for the Hesselø offshore wind farm.

The site investigations will be initiated by Energinet in early Q1 2023 and will cover geophysical and geotechnical studies of the areas potentially designated for offshore wind farms and their possible cable corridors, as well as marine biological studies to be carried out in the surrounding areas.

The issued permits do not grant rights to develop the areas in scope but gives Energinet the right to gather relevant data concerning the identified sites. A potential developer will be able to use the results of the preliminary site investigations for the environmental impact assessment (EIA) which concrete plans for establishing an OWF will have to undergo at a later stage.

With the Energy Agreement of 29 June 2018 entered into by the majority of the political parties in the Danish parliament and the subsequent Climate Agreement for energy and industry etc. of 22 June 2020, it was decided to conduct a tender for the rights to develop an 800-1200 MW offshore windfarm at Hesselø. On 2 July 2020, a ministerial decree was issued instructing Energinet to conduct preliminary site investigation and to establish a grid connection point for the future Hesselø OWF.

In June 2021, the tender process for the Hesselø OWF was however put on hold as Energinet's initial studies had identified soft sediments in large parts of the area designated for the OWF. With the Climate Agreement on green power and heat 2022  it was then decided to relocate the OWF to a site south of the original location which had been indicated as a potential alternative in the screening report on suitable marine areas published on 11 May 2022.

You can read more about the screening report (in Danish).

On 30 June 2022, a ministerial decree was again issued instructing Energinet to conduct preliminary site investigation and to establish a grid connection point for the OWFs new location. The order of 30 June 2022 thus replaced the order of 2 July 2020.

The DEA expects to issue the tender for the Hesselø OWF concession agreement in early 2024 with Energinet’s site investigations to be completed in December 2024. The OWF is expected to be fully operational by 2029. 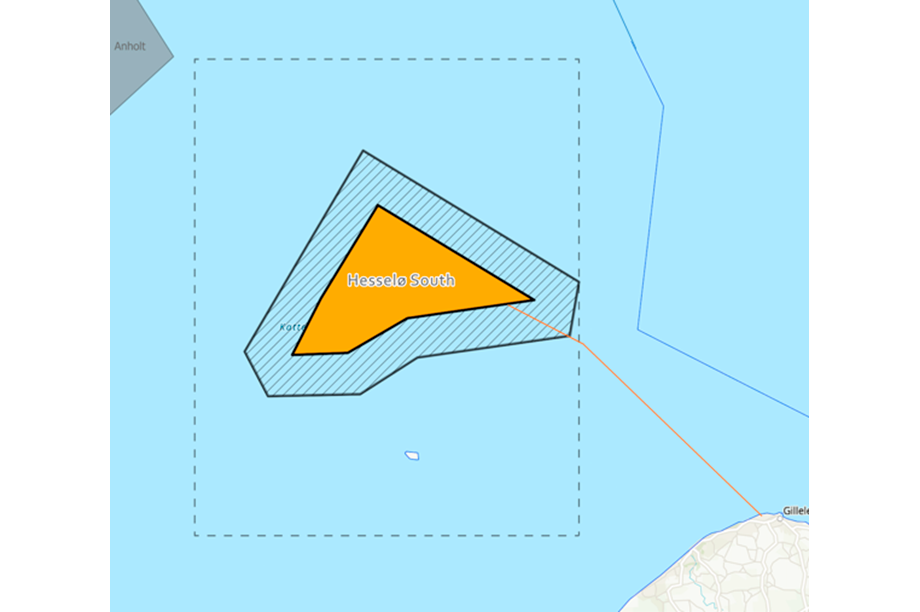 Hesselø OWF will be located in Hesselø Bay in Kattegat, approx. 30 km from the north coast of Zealand. The orange line indicates the cable corridor with landfall at Gilbjerg Hoved in North Zealand which was investigated under the first ministerial decree of 2 July 2020.

The orange area, which show the site designated for an OWF, and the surrounding shaded area constitute the main scope of the site investigations, with the geotechnical investigations being limited to the orange area and marine biological studies to be carried out within the dashed rectangle.

With the Danish Finance Act for 2022 it was decided to add 2 GW to the target capacity set by the Energy Agreement of 29 June 2018 and subsequent Climate Agreement for energy and industry etc. of 22 June 2020. With the Climate Agreement on Green Power and Heat 2022, it was furthermore decided that an additional 4GW offshore wind should be commissioned by the end of 2030.

Note: For Kriegers Flak II, no site investigations will be conducted outside the Danish Exclusive Economic Zone (EEZ).

The Danish Energy Agency works for a sustainable future. We are responsible for cost-effective and secure supply of electricity, gas, heating, water, telecoms and waste management. Our objective is to realize an intelligent green transition, where Denmark is a front runner and Danish experience can serve as inspiration to countries around the globe.

The Danish Energy Agency (DEA) has now evaluated the applications and has recommended the Minister of Climate, Energy and Utilities to award the first three (3) exclusive licenses for exploration of full-scale CO2 storage in the Danish North Sea to TotalEnergies and a consortium consisting of INEOS E&P and Wintershall DEA. The licenses are an important step towards realizing Denmark’s CCS (Carbon Capture and Storage) strategy and will kick start the plan for the development of full-scale CO2 storage in Denmark.

Following a political agreement, the construction of the North Sea Energy Island – one of the largest projects in Danish history – now enters into a new phase. The tender material and competitive dialogue kicks off next Spring.

Supplementary 5-weeks public hearing on the sea-based part of the strategic environmental assessment (SEA) of the plan for Hesselø Offshore Wind Farm (OWF).

On 15 August 2022, the Danish Energy Agency opened the first tender of licenses for storage of CO2 in the Danish subsoil in the North Sea. At the end of the tender, the DEA has received two applications.