The Danish Energy Agency initiates a five-week public hearing concerning the environmental assessment for the plan of an energy hub in the North Sea with associated facilities. Residents, authorities, companies and other interested parties will be able to submit their remarks and ideas from 22 August to 26 September 2022, and in this connection, the Danish Energy Agency is hosting a dialogue meeting on 6 September.

The construction of a new energy island approx. 100 kilometres off the west coast of Jutland, will be the largest construction project of its kind in the history of Denmark, and the Danish Energy Agency, which is in charge of the development for the island, has correspondingly high ambitions:

"With the Plan for Programme North Sea Energy Island, which is now to be environmentally assessed, the Danish Energy Agency has created a spacious and future-proof plan with room for innovation, both in relation to the flexible island concept and additional offshore wind farms, but also with the possibility of expanding and connecting the plant to green technologies not yet invented.

The upcoming environmental assessment process is an important step in the realisation of the North Sea Energy Island, which marks a new era for production of energy from offshore wind on an unprecedented scale, which again will have tremendous significance for the phase-out of fossil energy sources in both Denmark and Europe.

We are thus dealing with an innovative construction project, which is why feedback from the public is so important. Therefore, we encourage everyone with an interest in the North Sea Energy Island to ask questions and submit proposals for issues they want covered in the strategic environmental assessment that will serve as the foundation for plan”, says Mogens Hagelskær, deputy director general responsible for the energy islands in Denmark. 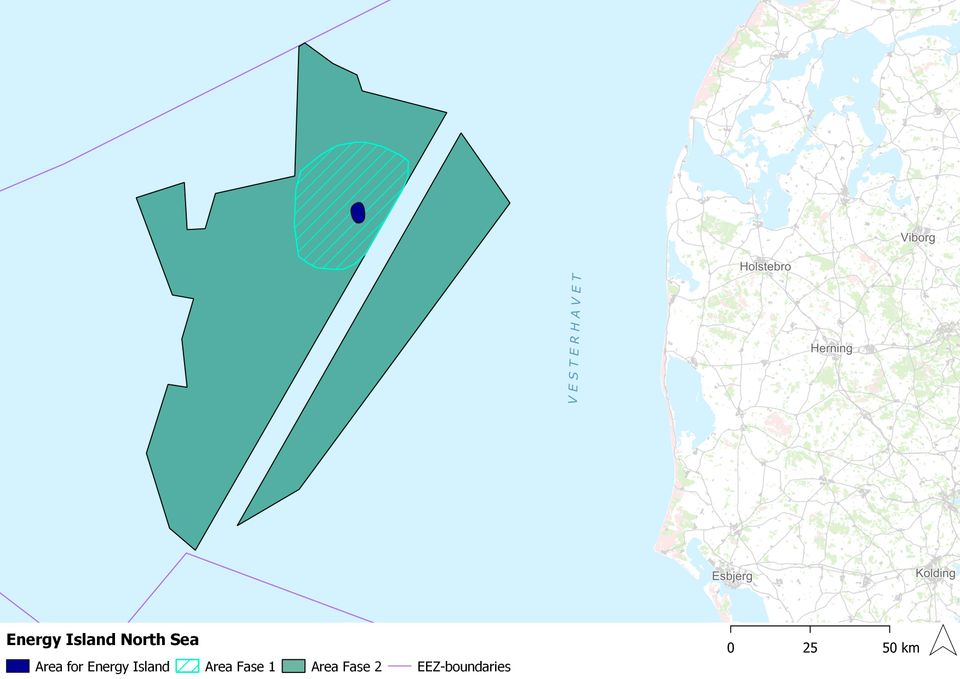 A hugely ambitious energy project with many advantages

The design of the North Sea Energy Island will allow future expansion with more intelligent solutions, which can store or convert electricity from renewable energy from the offshore wind turbines, for example into green fuels for heavy transport e.g. trucks, planes and ships, using PtX. In that way, the energy island will contribute significantly to the green transition and help accelerate the transformation of sectors, which are currently predominantly driven by fossil energy. Also, the energy islands will be a decisive step for the Danish government in achieving its goal toward climate neutrality in 2050 at the latest. Not least, the construction of the energy island and the associated offshore and onshore facilities, is expected to create many new jobs in various sectors.

What is the plan for Program Energiø North Sea about?

The Climate agreement for energy and industry etc. of 22 June 2020, and later supplementary agreements, commit Denmark to building the world’s first energy islands – one in the North Sea and one on Bornholm. The energy island in the North Sea is to be built in phases, as electricity consumption rises and the energy island is connected to other countries. It has been decided that the North Sea Energy Island must be realised with at least 3 GW of offshore wind power by 2033 (phase one), and that the offshore wind capacity must be expanded to at least 10 GW as soon as possible thereafter, with 2040 as the aim (phase two), depending on the necessary international connections being in place.

In relation to the strategic environmental assessment (SEA) of the North Sea Energy Island, it is assumed that it must include establishment in two phases:

The SEA will be broader than the political agreements, to ensure flexibility in the implementation of one of the largest construction projects seen in recent years. Both phase one and two must allow for Power-to-X (PtX) plants[1] and other innovation. To ensure that the plan and the environmental assessment are at the forefront of technological development in offshore wind turbines, the use of turbine sizes that have not yet seen the light of day is also covered by the plan.

The aim of the energy islands is to ensure that Denmark can electrify more areas of society in the coming years, and to help ensure that the electricity consumption of all Danish households and businesses is met by green electricity. Energy from the energy islands can be exported to neighbouring countries and contribute to the green transition across Europe. It has to be possible to connect technologies, which can store or convert electricity from renewable energy from the offshore wind turbines, for example into green fuels using PtX.

The public hearing runs over a period of five weeks – from Monday 22 August to Monday 26 September 2022.

Read the relevant consultation material as well as information on how to participate in the consultation etc.

Based in part on the ideas and inputs received during the consultation, the Danish Energy Agency will then decide on the issues and environmental impacts to be examined in the environmental assessment of the plan.

The results of the environmental assessment are expected to be published in the second public hearing in the 2nd quarter of 2023.

The Danish Energy Agency works for a sustainable future. We are responsible for cost-effective and secure supply of electricity, gas, heating, water, telecoms and waste management. Our objective is to realize an intelligent green transition, where Denmark is a front runner and Danish experience can serve as inspiration to countries around the globe.

Subscribe to all the latest releases from Danish Energy Agency by registering your e-mail address below. You can unsubscribe at any time.

The possible climate effect of the gas leaks from the Nord Stream 1 and Nord Stream 2 pipelines29.9.2022 16:07:14 CEST | Pressemeddelelse

The emissions from the gas leaks on the Nord Stream 1 and 2 pipelines may in worst case be equivalent to approximately 32 per cent of annual Danish CO2-emissions.

A leak has been discovered Monday from the Nord Stream 2 pipeline in the Danish part of the Baltic Sea. The Danish Maritime Authority has released a navigational warning and established a prohibitive no sail zone around the area.

The Danish Energy Agency publishes an English version of the tender material for tender of licenses for investigation and CO2 storage9.9.2022 13:09:00 CEST | News

The Danish Energy Agency has made an English version of the tender material for Denmark’s first tender of licenses for investigation and CO2 storage available on its website.

Today the Danish Energy Agency will publish an invitational letter stating that from 15 August 2022 it is possible to apply for licenses for investigation of and storage of CO2 in an area of the North Sea.

The Danish Energy Agency invites all interested parties to a briefing on the upcoming call for applications for exploration and carbon dioxide (CO2) storage permits.